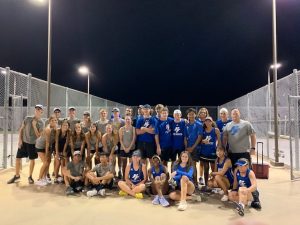 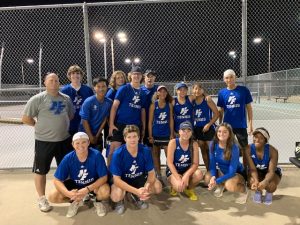 On Tuesday night October 1st the North Forney Falcons took on the cross town rival Forney High School in a district match up to determine who would finish second or third with the top 4 teams making playoffs. The teams were neck and neck coming out of the doubles matches. North Forney took a 6-4 lead in doubles with wins from the partnerships of Brantly Tuten/Tryston Vaut, Alana Lopez Pagan/Emily Forrester, Chloe Gaines/Mia Baez, and finally our mixed doubles Madison Clark/Jerric Atienza. North Forney kept building on the lead by pushing things to 8-6 but Forney High stayed on our heels. It was neck and neck but some amazing singles wins helped push us over the top. Girls singles winners included: Girls- Alana Lopez Pagan, Madison Clark, Emily Forrester, and Jordan Oliver. Boys singles winners included: Jerric Altienza and Casey Clemo who won in a fantastic comeback match that went three sets ending in a very close super tie breaker finish. The official score in the race to 10 ended 10-8 with the overall ended 10-9. It was a very hard fought battle between the two very talented sides. Playoff schedule for both North Forney and Forney High will be released in the next couple of weeks. Cross town match is over and now it’s time for Forney ISD to focus on playoffs!!! Best of Luck to NFHS and FHS as we get ready for the UIL PLAYOFFS.

No Events This Week

Events are added by athletic staff.
View All Events