Falcons Official Sponsor
7th Grade A Team- The Bears traveled to Kaufman for the district tournament this weekend. The Bears came in as the #1 seed having a 6-1 record on the season. The Bears won their first game convincingly over Midlothian Walnut Grove 48-20 then faced off against Warren winning that one 47-30 going 3-0 against cross town Warren this season. Then in the championship game the Bears took on Lancaster. Having beat them already earlier this year 50-42 the Bears played their best game of the season. The Bears led by 27 at half and won the game 54-29 taking home 1st Place in District! These Bears have worked hard all season and a great group of young men. It has been a pleasure coaching them this season! 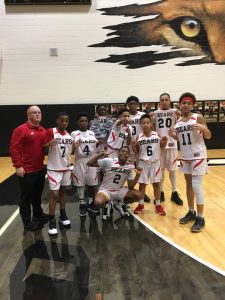